With our unique vision solutions, we check a wide range of features and properties to guide, direct and help robots view, pick and inspect. Flexible and adaptable cameras and sensors – optimise your production for fully automated robot control. Easy robot integration, backed by a brilliant team of robot and vision engineers.

Why you need our robot vision systems

Works with all Robots

Our vision guidance systems are designed for quick and easy integration with all the major robot manufacturers. Our vision systems take the guesswork out of integration. With both 2D and 3D systems for advanced robot guidance.

We understand robot guidance, and with one of the highest precision and accurate vision solutions available, our cameras are ready-made for ease-of-use automated robot control. Our powerful vision interface provides real-time positional data, statistics and production info.

Explore some of the key features and benefits of using IVS robot vision systems for guidance, quality, inspection and metrology

Reduce expensive tooling allowing products to arrive in any orientation and be guided accurately and robustly. Non-linear calibration corrects for lens and perspective distortions, providing exact co-ordinates and ultraprecision. 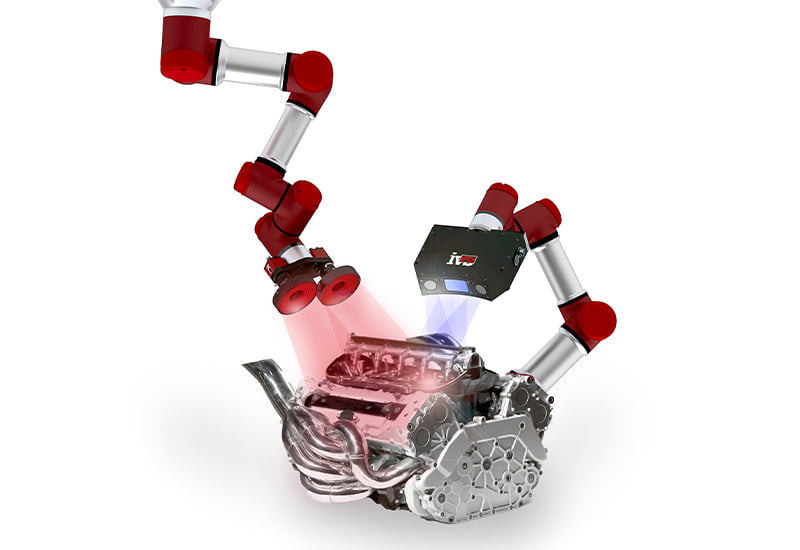 De-risk the installation, we integrate the whole solution, our engineering have extensive experience in automated 3D pin picking and loading. In order to automate the unloading of bins in a reliable and effective way; we control recognition, gripping and robot motion using our state-of-the-art 3D bin picking solutions.

Pick parts from belts at speed using 3D analysis. Enable handling robots to grip and sort products, everything from food items, packages and cartons through to moulded parts, machined components and random products. Our 3D vision systems supply the robot with the critical data for quality determination, such as position, volume and features. Easy integration with all robots including ABB, KUKA, Yaskawa, Staubli, Mitsubishi, Fanuc and UR. Our powerful contour matching offers a fast and easy way to locate and pick products from conveyors, belts and lines. Use our experience of optics, lighting and vision to get the perfect vision set-up for your application.

Deliver immediate improvements to your manufacturing process, enabling faster production, without defects and at lower cost.

Designed for easy integration on robots.

Get in touch today so we can answer and questions you have regarding our robot vision sensors, systems and cells. See how they can save you money, protect your brand and increase your yield.

Send us a message and we will respond as soon as possible.

Have a Question? Get in touch

The expansion of industrial robots has grown exponentially in the last few years. The push towards ever more flexible production control and the advent of flexible manufacturing, has meant that industrial robotics is now a cornerstone in the modern production line. The ability to switch between product ranges and component types means that robots need “eyes”, in order to see and differentiate in real-time between product types. In addition, there is a drive towards the increase use of automation and the reduction of manual based labour in production. Robots can replace humans in some of the more monotonous production and assembly tasks, but as speeds and complexity increases, the ability of a robot to understand a complicated scene becomes more difficult.

This is where vision comes in. Vision systems for robots have a difficult job. They need to interpret the scene and unpick the detail to really understand what is important within the image. Lighting and optics choice is critical in machine vision, and never more so than in 3D bin picking and general robot control. IVS have extensive experience in specifying the exact requirements for lighting, filters and optical components, as well as the robot camera or 3D vision system. All the elements make up the drive chain of the vision decision.

The introduction of vision-guided robots needs carefully thought out planning. The compatibility is critical, as well as assessment of the intended application requirements, scalability in handling of the products, and ultimately flexibility as products and designs change during the lifecycle of the production line. Robots using vision can improve production efficiency and reduce costs. The labour saving is also critical for most applications – therefore production planning, in terms of factory layout, process flow and flexible changeovers, all need to be thought about during the planning stage.

Why you should use a robot vision system?

If you add vision systems to a robot or flexible robotic arm you are giving it “eyes”. This reduces the need for costly and complex fixtures and nests by providing a defined area for the robot to search for objects. The flexibility of robotics and robotic automation, allows the robot to adapt to larger variations in part type, shape, size and location, reducing the complexity of the manufacturing cell. So, adding a vision system opens up a much larger application area, such a robot palletizing and robot de-palletizing. Parts can be picked up by the robot, assembled, components loaded and unloaded, lifted off bins and located into fixtures. It’s also feasible for robotic vision systems to track and pick components in motion running on a conveyor.

How does robotic vision work?

A robot vision system will normally consist of one or more 2D area-scan or 3D camera units, defined LED/laser lighting, vision software and the required robot. The industrial camera captures an image of the inspection area and the vision software will search for a feature of contour which requires position and orientation. This information is calculated by the vision software to provide an output in x, y, z and angular for the robot controller. The defined positions are then updated with the offset calculated by the vision system. The industrial camera could be in a fixed position within the cell or alternatively mounted on the robot arm. IVS provide vision guided robotic system which are fully integrated with all the major robot manufacturers, allow simple and quick vision system integration.

What about robot vision inspection.

Modern flexible robot inspection cells are built around a number of camera (normally up to two), integrated onto the robot head. The robot will then move to defined inspection positions around the sub-assembly or part to inspection, in high detail, individual areas. This is normally combined with the off-set robot adjustment as detailed above so that parts can be out of position but the camera checks the position and moves relative to a datum, before the quality inspection capture takes place. Industrial robots are able to significantly improve product quality and production yield. Applications are performed with high precision and superior repeatability on every job. The precise reliability from industrial robots can be difficult to accomplish any other way. Robots are regularly being upgraded, but some of the most precise robots used today have a repeatability in microns. Robots are increasing workplace safety, allowing for more flexible manufacturing and ultimately driving the automation of production lines.

Who are the major industrial manufacturers of robots?